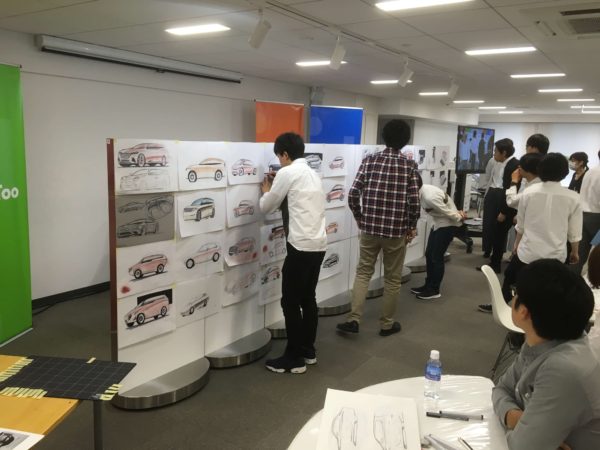 On May 26, we have had the opportunity to invite an international professional car designer Mr. Kunihisa Ito as a special instructor for COPIC WORKSHOP.
Mr. Ito has a brilliant career as an automotive designer at major car companies such as Adam Opel and General Motors Company.
He is now a professor of Transportation Design Department at CCS (College for Creative Studies in Detroit, MI).

The 26 enthusiastic participants (most of them were the students want to become car designer in the future) of this workshop were given the chance to learn sketch techniques directly from Mr. Ito.
He was teaching the participants the secrets of Copic techniques and giving useful tips on car rendering, as well as product design.
After the workshop, we threw a convivial party and participants had a pleasant talk with Mr. Ito in a friendly atmosphere.

■ Place
The Gallery Too（株式会社Too本社3F）
This workshop was held at The Gallery Too, an interactive space creating new future visions, located in the head office of Too group.

■ Profile: Kunihisa Ito
After graduating from ArtCenter College of Design in the US, Mr. Ito started his career as an in-house designer at Adam Opel AG and General Motors Company. Then he went independent and got involved in a wide range of design projects with Luigi Colani, Porsche Design Group and so on. After holding prominent positions such as manager of design division at Ford Motor Company and Nissan North America, Mr. Ito has become a professor of Transportation Design Department at prestigious art college, CCS (College for Creative Studies in Detroit, MI).

Too group still have plans in the future to hold workshops on Copic technique.
Visit this website（copic.jp）or, http://www.too.com regularly for updated information on workshops and other events.
New information will be added as it's available.